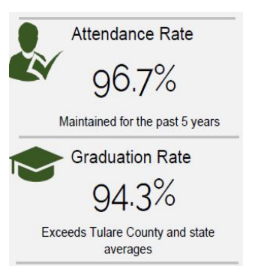 The study is of great value to the field, given Lindsay’s status as an early adopter with more years of implementation than most competency-based education districts. They have many students from traditionally underserved groups, which also makes the district a key exemplar for the fundamental equity mission of competency-based education. Specifically, the student body is 95% Hispanic, 91% from low-income families, 41% English learners, and 24% migrant learners.

Lindsay provides evidence that students in competency-based schools can exceed the performance on state exams of students in schools with similar demographics. State exam scores are typically among the few indicators available to compare schools and districts over time, so they often serve as a prominent indicator of school effectiveness. It’s important to note that competency-based education calls for systems with multiple types of assessments that can capture each students’ progress continuously, provide an empowering learning experience, and yield evidence that is timely, relevant, and actionable.

Over the past five years, Lindsay students have gone from 26% proficient to 47% proficient on the state’s Smarter Balanced Assessment Consortium (SBAC) assessment. They have also gone from the 33rd percentile rank to the 87th percentile rank in the SBAC’s English language arts (ELA) achievement during the past three years when compared to similar school districts in California. Additional positive findings are that the district exceeded county and state growth on the SBAC ELA and math exams and ranked first in SBAC ELA growth in 2019 compared to 63 similar districts.

Lindsay reports an attendance rate of 97% for the past five years, a graduation rate (94.7%) that exceeds county and state averages, and an increased rate of participation in dual enrollment courses. Their 75% rate of college enrollment among graduates is higher than groups that traditionally have higher academic attainment, such as “high-income” and “low-minority” districts nationwide.

Finally, Lindsay reports on a non-academic outcome indicator that they believe is related to academic success, based on “evidence in the literature that low-income students who have positive relationships with their teachers have higher academic achievement and more positive social-emotional adjustment.” The outcome indicator is the School Climate Index from the California Healthy Kids Survey. As shown in the table below, Linday’s state percentile on this index has grown from 52% in 2011 to 97% in 2018, with higher scores representing “more positive school climates, higher supports and engagement, and lower levels of violence and substance use at school.”

Every competency-based school and district can track these types of outcomes from data they are required to report to the state. They can also track additional internal data that they believe will help them evaluate their effectiveness, refine their strategies, and explain their approach. A two-page summary like this Lindsay report is a powerful information asset for concisely sharing outcomes with audiences such as policy makers and community members.

To the extent that districts are trying to deepen the advocacy impact of these types of studies, it can be helpful to publish an ancillary document that provides more details of methods and findings to answer questions from supporters and critics alike. I emailed with Barry Sommer, Director of Advancement, and Abinwi Nchise, Coordinator of Research and Evaluation for the Lindsay Unified School District, who are listed as contacts for the report. While a more detailed report is not currently available, they said they obtained comparison data about other districts from 5CAST, a service that organizes and disaggregates California’s statewide achievement data. Districts from other states can ask their state education agency if a similar resource is available; Massachusetts, for example, has a District Analysis Review Tool that serves a similar purpose to the 5CAST data.

Districts might also consider working with an external research organization whose independence and range of evaluation experience may inform the study design and influence a broader range of audiences. (Before coming to the Aurora Institute, I worked for one of these organizations and would be glad to speak with any districts that want to explore this option further.) Working with an external organization and producing detailed reports is more expensive than an internal study, and financial support is sometimes available from local foundations and government agencies that are invested in educational innovations.

The Lindsay Unified School District has provided a valuable and persuasive study of the impacts of competency-based education in a district that has been doing deep implementation for several years. The field needs more studies like this one.

All blog posts from Eliot Levine